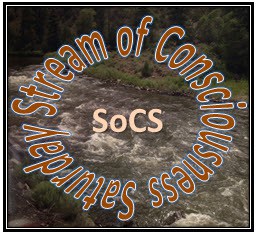 He was about that age when the signs of addiction first became apparent. When I was a young girl, I lived with addicts. Alcoholics, mainly but there were other addictions in my home. I saw the warning signs. I knew what I was looking for. I ignored them. I thought once he moved away from the people that he used with, things would get better. He could start his life all over again. It would be a fresh beginning. That the hurts and the demons that plagued him here would stay here.

I was wrong. The demons never went away. They hid. For years they found a hiding place and festered and grew undetected. Unbeknownst to anyone else, they grew to astronomical proportions. No one knew. Until they became all-consuming and almost threatened to swallow him whole. They almost succeeded too.

The past few days I have had to deal with a roller coaster of emotions. I have been stuck, here, while he is there. The demons have finally reared their ugly heads. He finally admitted the demons that he was fighting. And they are some strong demons. Everyone here knew there was demons. He kept secret just how big they were. Until the secret could not be kept any longer. He was on his way from there to here when the demons just became too much for him to fight anymore. It was a losing battle and he was losing it fast. He had the foresight to realize that he needed to call in reinforcements, before he succumbed to the demons that he was fighting.

In races the ill-prepared Queen to save him from the demons. She is strong, but they are stronger. The burden of saving him is almost too strong for her to shoulder by herself. This is where I come in. I am the support on the other end of the screen. I am doing research on his demons, and finding different weapons to use in the battle. Weapon after weapon I stock in the arsenal for the Queen. Meanwhile, He never did make it Here. He got stuck somewhere between here and there, and I was not able to deliver the weapons in person.

I had to go on with Life, even though I felt like life was crumbling down around me. I had to wake up and take Kid and Baby to school. I had to go to work, and work with my client. Or with 25 kids at my other job. Or cook the dinner, clean the house, do the dishes, sort the laundry. Meanwhile, in the back of my mind, the knowledge that at any moment the demons could win the battle was there. The thought tormented me, tried to consume my actions, succeeding only in consuming every available thought.

The demons have backed off. For now. He finally arrived Here, with the Queen. The optimism that the battle will be won is high. Meanwhile, I am still stocking up my arsenal for when they return.

I wake up in the morning. I check my agenda to determine what obligations I have for the day, and where I need to go, and what I have to get Kid and Baby ready for. I slowly clamour out of bed, wishing I hadn’t been up since 5:00a.m. As I am pulling on a shirt, I hear Kid exclaim excitedly

In a moment I had a series of thoughts run through my head. What are they doing that they shouldn’t? Are they making a mess? Are they getting into trouble? No… wait. His tone of voice made it seem like he was looking at something. Something that he did NOT cause. Something that would have happen in the natural world…..

And in that instant, I was filled with an extreme amount of dread. I knew exactly what he was looking at. I jump over my bed, and hide in the corner, as far away from his room that I could get
“Kill it! KILL IT!!!” I scream.

“…. Oh-kay Mama.” I could hear the sadness in the voice as I demanded he get rid of the spider he so desperately wanted to show his sister.

I am a Type A personality and it takes a lot of effort, and reminding, for me to “live in the moment.” I am constantly living in the future. I try not to worry, because I believe things will work out. But, at the same time, things always work out because I am aware of what I need to do to make my future run smoothly.

Even now, as I am wrapping up my psychology degree, all I can think about is finding a job. What type of job will work for me? Where will I be happy, but still be able to make enough money for our family to live comfortably? Am I willing to give up my volunteer time at my children’s school? What are my priorities, and how can I find a job that will help me pursue my passions?

These are some of the thoughts that plagued me as I was driving this morning. I was also plagued with thoughts such as, What if my husband falls asleep before I get home? Will my kids destroy my house? Will they watch television, knowing they are grounded? Should I leave school early? I wish I didn’t have to go to school. I should be at home fine tuning my resume.

Then it hit me. I was on my way to class. My LAST class. Not just of this course. Of my entire degree. After this, the only thing I have to worry about is passing my final exam. I never have to go to school again. I never have to sit through a boring presentation. I never have to stay awake at night trying to cram for a final exam. No more study groups, no more school supplies, no more stressing about grades or GPA. I will be done. My ten year old dream of obtaining a B.Sc. in Psychology will be complete. I will have letters behind my name! (Now I just have to figure out what my name will be 😛 )

That thought causes me anxiety. I am going back to planning out my near future.

This is going to be a quick post because a. Its late and b. I’m on my phone.

I wanted to share a few things that I am working on.
First, I decided to do a tribute price to the legendary icon, Robin Williams. Its not finished though, so until it is I do not want to show it off.

I can however give you a small sneak peek at it. 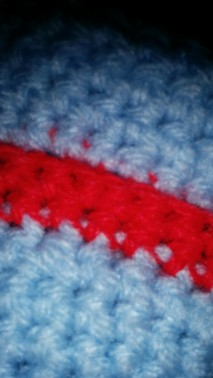 I have run into some design problems so I do not think this will be ready for the great reveal until after the weekend.

Another project that has been keeping me occupied is a state quilt that I am testing for the wonderful CarrieBeth Pelton at Carrie’s Creations.

The stack of squares is growing and should be done soon! I am excited to see the finished product.

Finally, I picked up another project I started on months ago. I was left with six skeins of a lovely rose colour in Caron’s Simply Soft. I decided to make Baby a blanket for her birthday and ended up getting 13squares in before my ADHD kicked in and the project went into hibernation, thinking I had plenty of time to finish. Well, the clock is ticking and Baby will be 7 in less than 2 short months.

Unfortunately, my idea to do granny squares bored me. So I decided to do another blanket using Beatrice Ryan’s CAL design (with perhaps a few modifcations as we go) 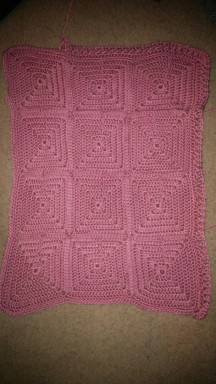 The original pattern states that we should start with 8 squares attached 4*2. Since I already had more than 8, I decided to make the centre 3*4 and expand outwards. I have not gotten too far yet but I do enjoy working with CSS. Above is a photo of the 12 squares attached, and the start of the third row.

Finally, I have added the book Friday Night Knitting Club to my audiobook shelf. I am only a few pages in, but I am enjoying the writing style so far. I am picky with audio books..not only do they have to catch my attention immediately to keep me from zoning out, but sometimes even the greatest book will be boring if read by a monotonous voice. So many books left unlistened to because the content, or the voice left me disinterested.

So that is what I have been up to in my wonderful world of Yarnia!

*note* will post links to Carries Creations and Beatrice Ryan when at a computer. Both of these ladies are wonderful designers! Be sure to click their links to see some of their beauties! END_OF_DOCUMENT_TOKEN_TO_BE_REPLACED

I am all about finding alternate ways of dealing with Baby’s ADHD. As I have noted before, I am not a fan of medication, although I know the benefits.
I want Baby to be able to deal with her ADHD without them though, and this summer has been about finding different ways of teaching her life skills.

One of her more aggravating symptoms is her inability to focus on any one thing for longer then 15 seconds.
“Baby, go get your shoes on.”
“Ok, Mama, I will… KITTEN!”

She gets distracted by rocks, shiny roofs, a moving piece of speck in the sunlight. She is the epitome of ADHD and on my good days it does give me a chuckle. The other day as I reminded her again for eleventh time to stay focused on her task, she began chanting to herself, as she is wont to do. “Focus, hocus, pocus”

It was like a lightbulb went off on my brain! Now, instead of getting frustrated with her for getting off task, I merely say “Hocus Pocus” and she will stop with whatever is distracting her and say Focus as she gets back to the task at hand.